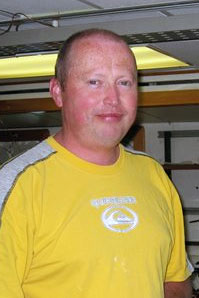 Professor Philip Nightingale is a Marine Chemist whose research is based around the cycling of trace gases in seawater and their transfer across the air-sea interface. He has worked extensively on the use of deliberate tracers (SF6, Helium-3, rhodamines and spores) to determine air-sea gas exchange rates, in pioneering in-situ iron fertilisation experiments and as Lagrangian tracers for studies of trace gas cycling and biogeochemistry. He is currently the PML lead for the Locate, ACSIS and ICOS projects.

Phil has a 1st class BSc from the School of Chemical Sciences and a PhD from the School of Environmental Sciences both at the University of East Anglia (UEA) and has worked at PML since 1995. He was Head of Science for the biogeochemistry science area, from 2010 - 2013. He has published over 67 ISI listed papers (H index 25, total citations ~4600) and a further 12 non-ISI listed but peer-reviewed papers. He has participated in about 35 field experiments, including 2 as Chief Scientist. He has collaborated closely with colleagues from the USA (University of Hawaii, University of Miami, University of Washington, LDEO, Moss Landing), New Zealand and Europe (LODYC, KNMI, Kiel, Mainz, AWI, Bergen) as well as several universities and institutes in the UK, particularly UEA, Newcastle, Warwick, Leeds, York and the National Oceanography Centre.

He has lectured at the SOLAS Summer Schools in Corsica in 2007/09/11 and BIOCAT in Kiel (2008). He has given invited talks in the UK, Germany, Italy, China, Korea and the USA. He reviews manuscripts for a range of journals and proposals for agencies in the UK, USA, Canada, Norway, S. Africa and Belgium. He has supervised or co-supervised 16 PhD students and has acted as an External PhD Examiner for the Universities of Leeds, York, Southampton, Newcastle, UEA and Bretagne. He is a Chartered Chemist and a Fellow of the Royal Society for Chemistry. He is an honorary professor at the School of Environmental Sciences, UEA.